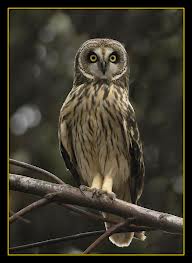 People of all cultures are drawn into the mystic realm of the owl. This divine bird of power invokes intense feelings of awe, inspiration and fear. All over the world, the owl is recognized as a symbol of wisdom and knowledge.


Pueo, the Hawaiian Owl has a special place in Hawaii’s mythology. Pueos were silently sailing over the Hawaiian Islands well before the arrival of the first Polynesians. Pueo is a short eared owl who inhabits the mountains and sea lands throughout the islands of Hawaii. Pueos are endemic to Hawaii and listed as an endangered species.
The Pueo has always been sacred to the people of Hawaii and treated with the utmost love and respect. The mystic bird of wisdom often appears to offer guidance and protection. The Mana (spiritual energy) of this beautiful creature of the night reaches far into the spirit world. Up to this day, many Hawaiians have such a strong connection to Pueo that she becomes a kinolau (physical manifestation) of Aumakua (ancestral spirit).
To the ancient Hawaiians, an Aumakua was a deified ancestral guardian spirit, embodying the form of an animal to watch over their descendants. An Aumakua could manifest itself as a pueo (owl), shark, a sea turtle, an 'Io (hawk), or other animal. Aumakuas empower, guide, protect and inspire their descendants. Pueo is among the oldest of the Aumakua. She is often asked for advice in times of need.


Pueo is considered the “Bringer of Good Luck", protector and messenger.

Her messages may come in a dream, voice, vision, or sign.

Many stories have been told of Pueo. One of the most famous legends, “The Battle of the Owls”, tells of an Oahu man who robbed an owl's nest. After he put the eggs in his bag, the owl-parent shrieked with grief and fury. The man felt terribly sorry and quickly returned the eggs unharmed to the nest. He also took the owl as his god and built a temple in its honor. The ruling chief thought this was rebellion against the prevalent gods, and ordered the man's execution. When the weapon was poised and the man feared his last breath, the owls gathered close and darkened the skies with their wings. The king's soldiers were blinded by the darkness and unable to perform the execution. The man was free. Pueo-hulu-nui near Moanalua on Oahu is one of the alleged places where this awesome battle took place.

There are times in the peaceful nights of the secluded mountains of Ka`u when I hear the whoosh of great wings as a Pueo flies right over my house. To me these occasions are always a good omen and blessing. The Pueo brings divine mana (spiritual energy) from the realm of the spirit world which fills me with humbleness.

My love and respect for the Hawaiian Owl inspired me to create Menehune Boy Koa and his Aumakua, the Pueo. 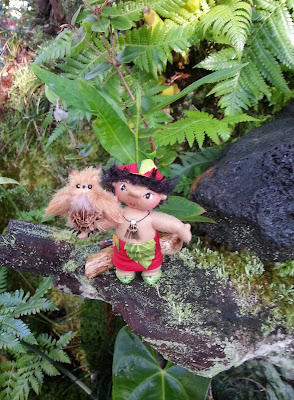 Rejoicing in the splendors of nature, Koa climbs higher and higher up the mountain into the Hawaiian forest. Koa is named after the Hawaiian King of Trees. He embraces the strong, fearless Mana (spiritual energy) of the magnificent Koa tree.

Koa inspires us to welcome life’s challenges with an open heart and grow from the valuable lessons they contain.

Pueo is Koa’s sacred Aumakua (guardian spirit). Pueo appears whenever Koa calls on her. She lands on Koa’s right arm, where he greets her with love and respect.
Koa knows that Pueo carries Mana, supernatural powers. At important times of change, she sends messages to Koa through visions and dreams. Koa always follows Pueo’s guidance, knowing that it will keep him and his Menehune Ohana (family) save from all harm and lead them to happiness and good fortune.
Koa and Pueo walk companionably through the enchanting Koa forest, honoring the trees’ brave, warrior-like Mana (spiritual energy). Together they rejoice in the peace and happiness that surrounds them. 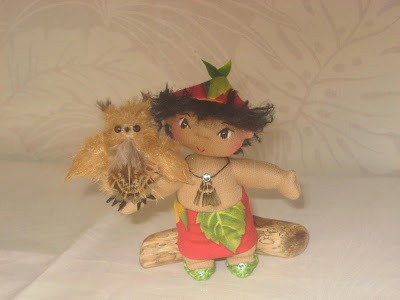 Koa’s Tutu (grandmother) crafted a special amulet using one of Pueo’s feathers and a green crystal to inspire spiritual strength, unity and love.
Tutu also sewed Koa’s Malu (wraparound) and hat out of red cotton with a maile leaf design and decorated the hat with 2 Maile leaves. Maile is the plant of eternal love. Tutu crocheted matching green underwear and shoes. All these things were Tutu's gifts of Aloha (love) to her beloved Mo’opuna Kane (grandson). 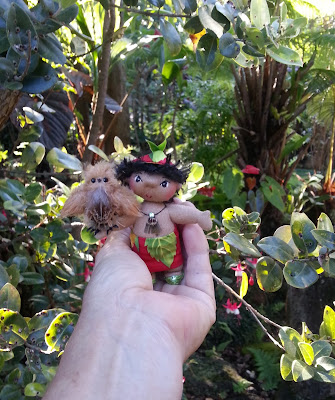 Koa is about 3.5” tall, fitting in the palm of your hand. The body is made out of stretch cotton and wired for flexibility. The eyes and mouth are intricately embroidered onto the face. Koa has tiny little hands and feet, ears, buttocks, and a belly button.
Pueo is about 1" tall and made out of brown synthetic fur and feathers. The eyes are black crystals. The beak is hand molded out of clay.
Koa’s doll stand is a small piece of custom hand carved, sanded and polished Koa wood. It represents a log.
All accessories were individually handcrafted.
Koa and Pueo are one of a kind collectible display dolls handcrafted by Hawaiian Dolls. 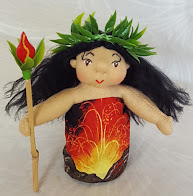 Welcome to the enchanting world of Magical Hawaiian Menehune Dolls! I appreciate your visit and hope you'll come again. I will be watching your blogs as well. Please leave a message! I would love to hear your opinions, thoughts, and ideas.

Mahalo! Have a great day!

Hawaiian Dolls
The beautiful, secluded mountains of Kau on the Big Island of Hawaii are my home. Writing about the mystical spirit of Hawaii and crafting Menehune dolls are my passions. The timeless wisdom of Hawaiian culture inspires me. Living in Hawaii along with intensive studies and research has given me some knowledge to integrate Hawaiian traditions and symbolism into my art and writings, and further increased my deep love and respect for all that is Hawaii. Honoring magical Hawaii and spreading its magnificent Aloha spirit throughout the world has become my life’s purpose and led me to many wonderful things including the creation of Magical Hawaiian Menehunes.

Promote Your Page Too